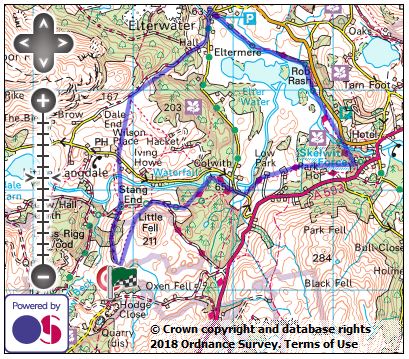 This is one of the first walks we discovered when our children were younger. It comes with the added incentives (bribes!) of a hot chocolate at Chesters by the River and/or chips at The Brittania in Elterwater or The Three Shires in Little Langdale. We first did the walk clockwise but always slightly feared the moans during the steady climb through Tongue Intake Plantation. We now do the "Reverse Elterwater Ring" with the early rewards of dramatic views of Colwyth Force, civilized picnic spots along the banks of Lake Elterwater and then the option of a plate of chips around lunchtime in Elterwater. (Not all our walks are food based - just most of them!).

Leave the cottage to the North through the National Trust wood. As you leave the wood through a gate continue straight on, rather than following the wall down to the left and take the path between The Dubbs and Little Fell and then drop down to the road from Stang End and head to High Park. From there to Tongue Intake Plantation and then follow the path which leads via Colwith Force to Skelwith Bridge (and Chesters) or you can cut the corner (as shown on the route on the map above) and use the new footbridge to take you direct to the North shore of Lake Elterwater. Here there is an easy lakeside path to Elterwater.

After another refreshment break leave Elterwater to the South past the Youth Hostel (on your right) and then make a right turn up the road after the Eltermere Hotel. This turns into a track which leads up towards Dale End. This is the climb we exchanged with Tongue Intake. Somehow it doesn't seem so relentless. Little Langdale awaits with all its charm (and of course there is another beverage/ice cream option to be found!). You can get there by staying on the track or turning off soon after you come out from the trees and walking down past Wilson's Place. Wythebank is 20-25 minutes away via Stang End.

Like many websites we use cookies in order to improve the user experience. By continuing to use this site you permit us to use cookies.
More information OK